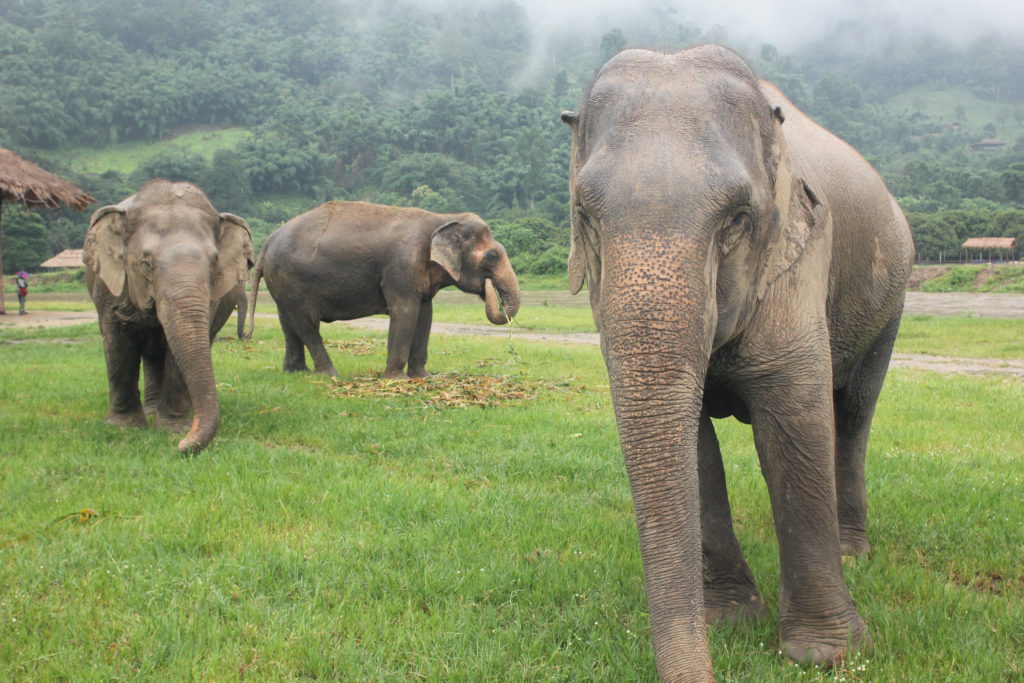 Our guest columnist Annie Peyton is writing from Thailand on a 2016-17 Henry Luce Scholarship. The Luce Scholars Program is a nationally competitive fellowship program that provides an individualized professional placement in Asia for 15-18 Luce Scholars each year.

Until recently, I was not aware that YouTube has an option for playing video at half-speed. I quickly became intimately acquainted with this feature in the last weeks of my Thai language instruction, which formed the first two months of my Luce Scholarship in Thailand.

In language class, we moved on from listening to our instructors speak in annunciated Thai to listening to “real” Thai people—that is, Thais on YouTube. We watched hours of YouTube videos: Thai music videos where uniformed college freshman bond over rescuing puppies during orientation, Thai tourism videos where kind Thai people help out a frustrated foreigner whose passport has been stolen by a monkey, Thai children’s songs about elephants and individual letters of the alphabet. All repeatedly. All at half-speed (at least the first several times). “Did you catch that? What did he say? Can you read that title?” our instructor would ask.  “What are they saying about the elephant’s nose?” (“Chang” means “elephant” in Thai, and the elephant song includes the line, “Chang chang chang chang chang”, which was burned into my brain for days. And I already knew the word for elephant, because Chang is also a brand of Thai beer.) 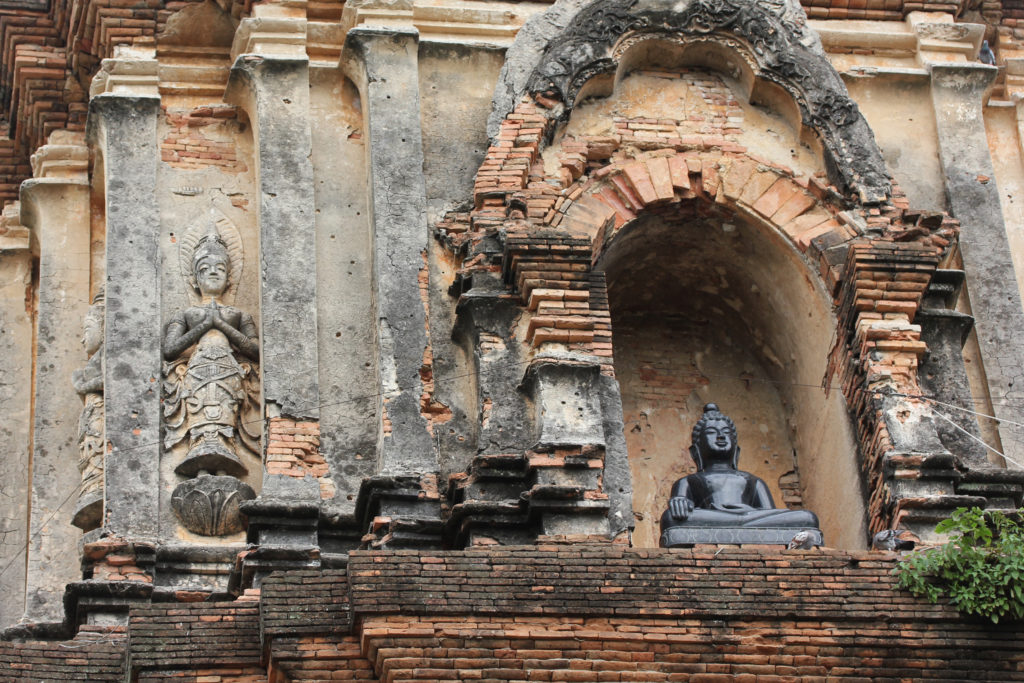 Because our language instruction was on a university campus, when the “freshies” arrived in August, some elements of those music videos came to life: students wearing uniforms of white collared shirts and long black skirts or slacks, grouped by department and forced by older students to do choreographed song-and-dance routines. (I’m still unsure as to why this happens, but as a spectator, I’m glad it does.) We took a small language class field trip one afternoon when our instructor brought us to watch a large group of purple-shirted dentistry students sing a song about killing various sea creatures (“Bplaa! Fish! You know that word! Bpuu! Crab!”). Language instruction was full of frustrations, but also small cultural gems.

Bit by bit, I’m building up knowledge about my new country. I used my free time during the last weeks of language classes to further explore Chiang Mai and elsewhere in northern Thailand, as I’m not sure how much I’ll get back there during the year. (I feel fortunate to have a Luce set-up where my language instruction is in a different city than my work placement, to learn more about two different areas of the country.) I climbed up a waterfall, something I didn’t know was possible until hearing about “sticky” falls made of limestone. I fed watermelons to elephants at the Elephant Nature Park. I expanded my knowledge of Thai fruit-carving by taking a class with other Thailand-based Luce Scholars, and we each walked away with a beautiful, carved watermelon (and the knowledge that we can dominate any future dinner party). 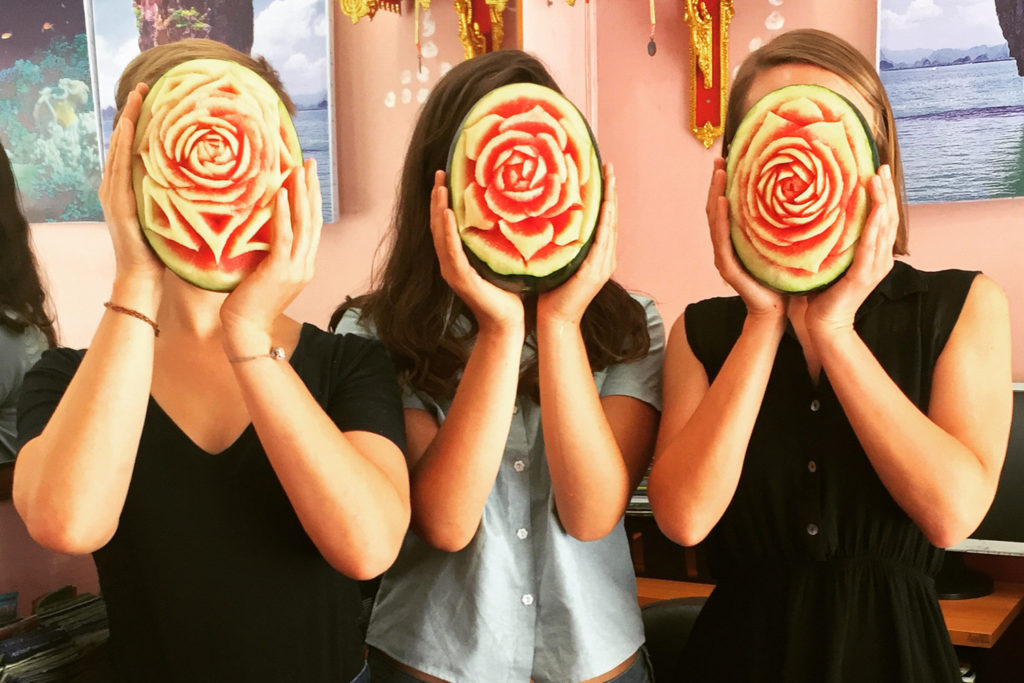 I’ve also started to expand my knowledge of Asia outside of Thailand. With a week free after language instruction, I went with one of the other Luce Scholars to Korea, in which we both became interested during our Luce application and placement processes. The Luce Scholars program provides opportunities to have a few bits of varied exposure to different Asian countries throughout the year. I discovered a serious love of Korean food, learned more about the recent history of a wildly interesting country—and, on the professional interest front, visited Seoul, a cosmopolitan city whose urban development came largely in the last 60 years and which has one of the best mass transit systems I’ve ever used.

Before leaving, I spent time reading about the Korean alphabet—something I never would have done had I not been about to leave for a week in Korea, and has only become possible for me through the Luce Scholarship. To me, this is one of the most exciting components of an opportunity like this fellowship—adding new and varied bits of knowledge to my personal arsenal. (My score on my annually attempted Jeopardy contestant quiz is sure to improve this year—though, admittedly, I’ve set the bar low.) 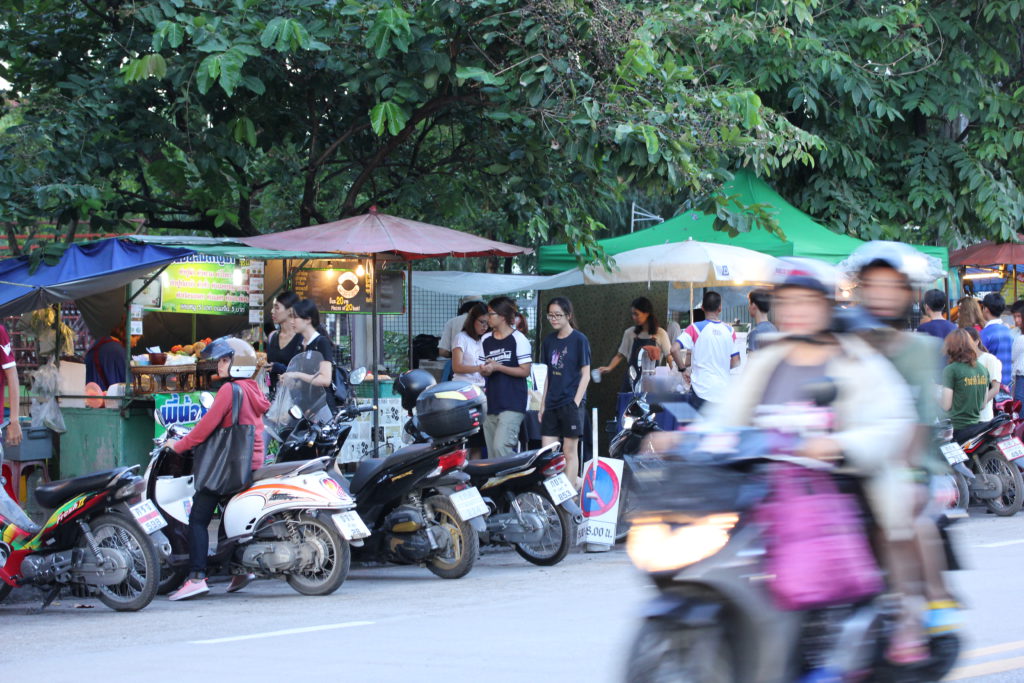 This week, I’ve begun my Bangkok life. Already, in just my first few days here, Chiang Mai and Thai classes feel a lifetime away. Despite language instruction being a much shorter block of time than work placement, this is a good reminder of how quickly the Luce year will go by. All of a sudden, my quaint life of class and moto-ing and cafes and street food I’d mentally mapped is thousands of kilometers away.

In Thai, “Jai yen yen” (literally, “heart cold cold”), is a kind way of saying, “Calm down.” Our language instructors frequently said this to us (especially to me, when I asked a lot of questions). It’s an important phrase to remember for the inevitable frustrations and uncertainties of this Luce year (and life in general). Some months from now, the Bangkok chapter of my life will be suddenly wrapping up, too. But let’s not get ahead of ourselves—for now, it’s just starting.