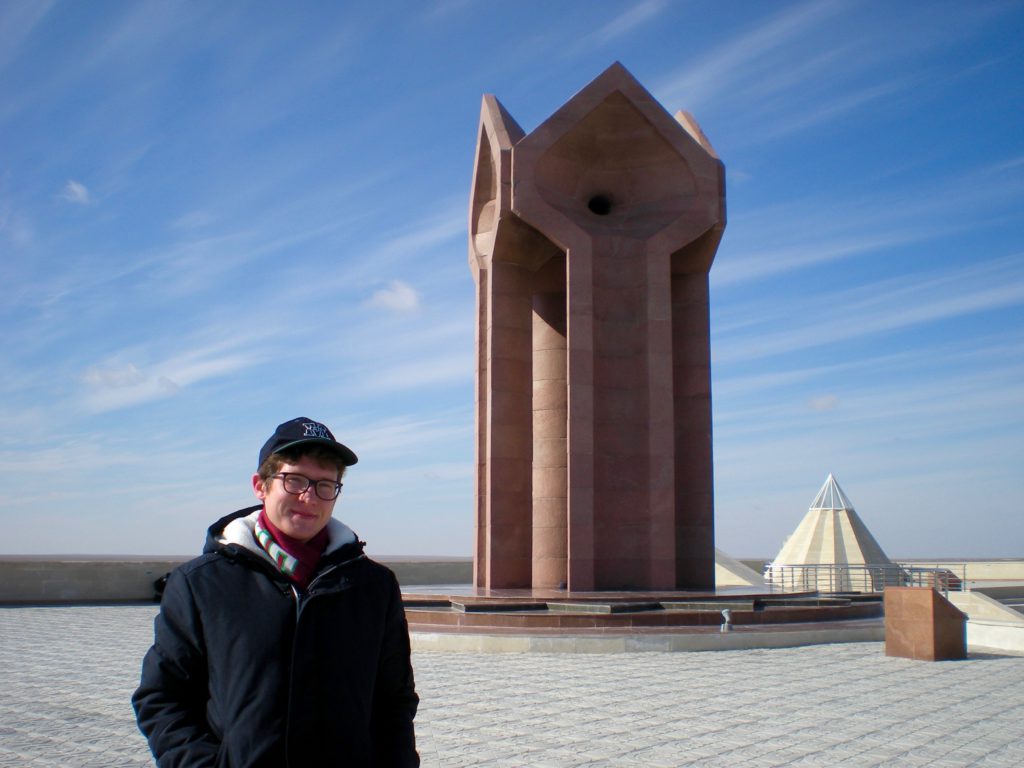 The Fulbright English Teaching Assistant (ETA) program is a year-long program for recent college graduates and young professionals who wish to teach English and foster cultural diplomacy in countries around the world. Peter, who first learned about Kazakhstan through an internship, is now deepening his understanding of the people and culture as an ETA. Here, he offers prospective applicants insight into the application process and his experience abroad.

1. What inspired you to apply for the Fulbright ETA in Kazakhstan?

As a student, I interned for a semester at the National Security Archive in Washington, DC, assisting with research and preparation of materials for a history conference taking place in Kazakhstan. The conference was about the Cooperative Threat Reduction (CTR) Program, or “Nunn-Lugar” Program, that helped newly independent post-Soviet countries secure and remove nuclear, biological, and chemical weapons left behind from the USSR. This research – locating, reading, and translating original documents – gave me an intimate and in-depth look at US foreign policy in Kazakhstan and Central Asia. After learning so much about Kazakhstan, I wanted to finally visit and learn firsthand about the country and its people. Having volunteered as an English language tutor for recent immigrants, I also knew that education was a great way to achieve understanding between cultures. With the Fulbright ETA program’s emphasis on cultural exchange and personal diplomacy, I knew it would be the perfect opportunity to learn about Kazakhstan.

As an ETA, I am now teaching and leading English language clubs at two multilingual STEM-focused high schools in Kyzylorda, Kazakhstan, a small city of 270,000 people in the south of the country. Outside of school, I help consult and coordinate the local American Corner, a US Embassy-sponsored community service and English language education program led by a group of dedicated volunteers. I also continue Russian language study with two different tutors, meeting 8-9 hours a week. I hope to begin Kazakh language lessons in the spring. Through my students, colleagues, and friends in Kyzylorda, I have had ample opportunities to learn about Kazakhstan’s culture and history. 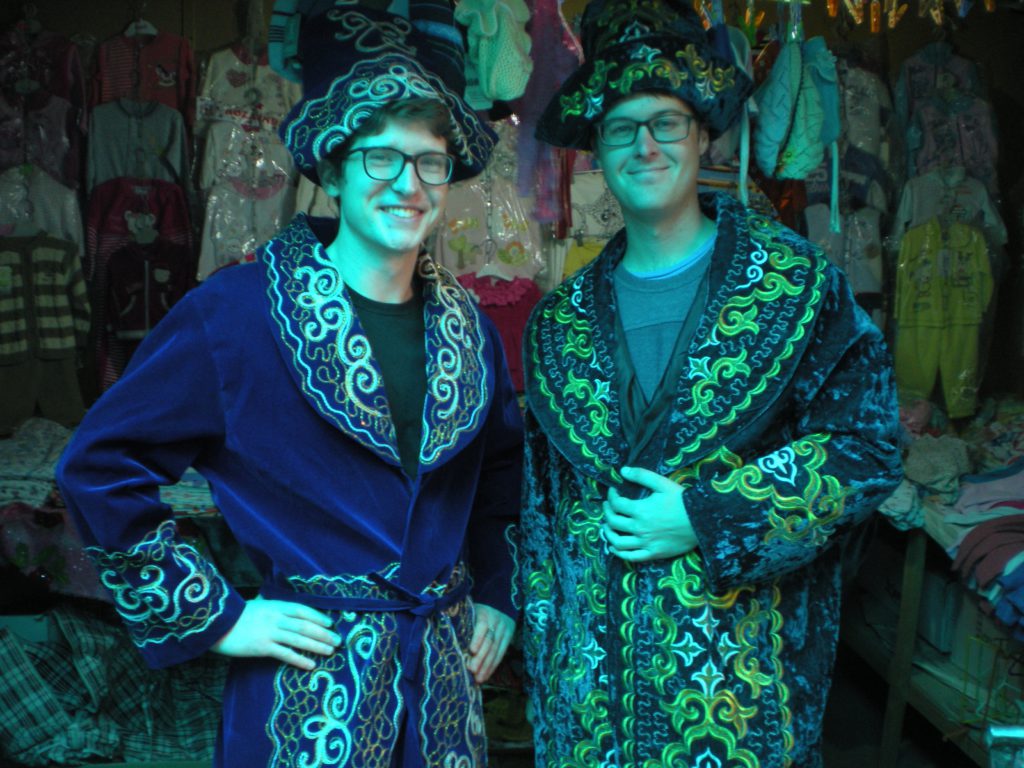 2. What are some of the advantages and challenges of being a fellow in Kazakhstan?

Kazakhstan is a fascinating country to live in and a great place to work as an English language teacher. There is great emphasis placed by government and educational institutions on learning English language, since it is deemed vital for the country’s continued economic, social, and political development as outlined in Kazakhstan’s “2050 Strategy” reforms. These reforms seek to place Kazakhstan among the world’s top 30 economies by 2050, and English language is considered key to achieving this goal. That said, schools are keen to utilize native speakers in educating their students and their country’s future leaders. Working with my students has been a lot of fun. They are curious to interact with a foreigner and eager to learn from a native English speaker. For almost all of them, I was the first American they had ever met. It is fulfilling to represent my country, talk about my home, and teach my students the language skills necessary for their future careers as scientists, doctors, entrepreneurs, and teachers, among other professions.

A major advantage of my placement in Kyzylorda is how wonderful of an opportunity it has been to learn about Kazakh culture in a city where it is so strong. This was evident from my first day here. In other cities, Russian language rivals Kazakh in its ubiquity, whereas in Kyzylorda, almost every sign you see and every conversation you hear on the street is in Kazakh. Public art displays along the city’s major highway include beautiful mosaics of Kazakh folk heroes, bronze sculptures of racing horses, and other allusions to Kazakh history and nomadic culture. People here are proud of their roots and very eager to share their culture; I have received invitations to traditional weddings, a personal concert with a local bard playing folk music, and even to a ranch for horseback riding.

Initially, however, it was somewhat difficult adjusting to life in Kyzylorda as a foreigner. Few foreigners, let alone Americans, ever visit the town, so I receive a lot of attention from locals. These interactions are almost always positive, but it can sometimes feel odd or even uncomfortable being singled out based on my appearance or language. For example, young people have sometimes randomly approached me on the street asking me to take a “selfie” with them or practice their English. While I do not look Kazakh, how exactly they tell my appearance apart from a local Russian (of which there are far fewer in Kyzylorda compared to other cities in Kazakhstan), I still have not figured out. I have made small talk with complete strangers, a shopkeeper for example, who somehow already knew my name before I met them. I attribute this to Kyzylorda’s relatively small size as a city, and thus social connectedness – people will hear about the new foreigner living in town. However, rather than feel awkward about this, I am glad to interact with Kazakhs and make a good impression of the United States and its people. For many in Kyzylorda, I am the first American they have met.

One additional challenge future Fulbrighters in Kazakhstan ought to consider is the climate. Kazakhstan’s continental climate lends to seasonal extremes, that is scorching summers and bitter winters. So far in Kyzylorda I count myself lucky – it has not gotten too cold and we have had only several big snows, but locals tell me the city is in for a harsh winter. Meanwhile, my colleagues in the north report that they have had deep snow and bitter cold for months. I will probably leave the country before I get a real taste of summer’s heat, however. 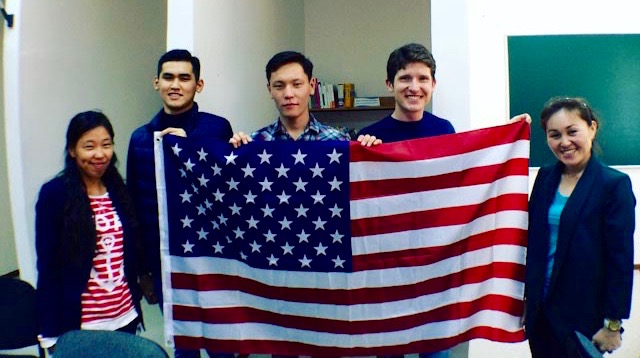 3. What tips would you give others applying to the Fulbright ETA in Kazakhstan?

Strong applicants will have teaching experience, especially ESL, and experience interacting with people from different cultures, as an ETA works as both an English teacher as well as a facilitator of intercultural exchange. I encourage future ETAs to search for relevant volunteer opportunities in their communities and at their universities. For example, I tutored English for a local non-profit helping immigrants and refugees improve their language proficiency. Working with international students through a peer mentorship program, helping them get situated in America and at school, would be great as well.

Knowledge of the country, previous travel experience in the region, and relevant language proficiency proved helpful in my application, but I do not think these things are as important as an earnest and genuine desire to learn about the host country and its people. Emphasizing this in the essays is key. Applicants should connect their professional, academic, and personal experiences to their goals as future ETAs. In my own essays, for example, I discussed how studying foreign policy between the US and Kazakhstan as an intern inspired me to learn about the country on a personal level, and that with my ESL tutoring experience I was qualified to teach and initiate cultural exchange as an ETA.

Lastly, it goes without saying: begin applications early so that there is enough time to outline, write, and revise the best essays possible. I had nearly a dozen drafts of my Statement of Grant Purpose alone. Applicants should take full advantage of their university’s fellowships office for essay revisions and other advice.

Peter Oster earned his B.A. in Global Studies, Russian, Political Science, and History from the University of Nebraska-Lincoln in 2016. He has studied abroad in Russia twice, most recently as a 2015 Critical Language Scholar in Nizhny Novgorod. Peter has interned at the National Security Archive in Washington, D.C., studying antiproliferation efforts in Kazakhstan and at his congressman’s D.C. office researching foreign policy and national security. After his Fulbright, he anticipates continuing his education in graduate school and a career in international affairs.