The Fulbright U.S. Student Program for Study/Research Awards are some of the most competitive and prestigious national fellowships for study and research abroad. Each year, graduating seniors and young professionals can apply for one grant in approximately 140 countries, which means selecting a country is a critical part of the Fulbright application. Candidates often ask what are the most and least competitive countries for securing a Fulbright award.

Fortunately, Fulbright publishes the application and award statistics for each country for the last three application cycles. The information provided by Fulbright isn’t easily sortable, so we’ve crunched the numbers for the last three complete years (2013 – 2016) of the Fulbright U.S. Student Program for Study/Research grant statistics to answer the most burning questions asked by Fulbright applicants. (Note, these statistics exclude the Fulbright English Teaching Assistant [ETA] grants – those will be published soon!).

What is the award rate for the Fulbright U.S. Student Grant? 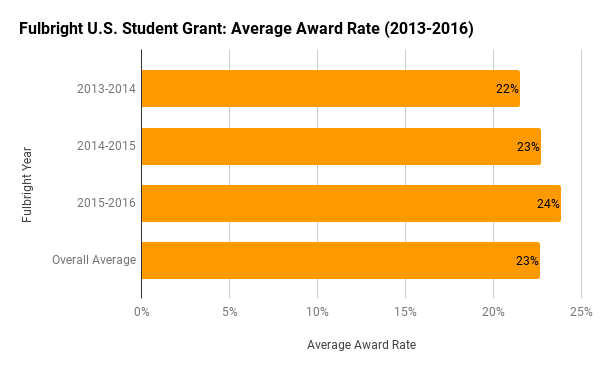 It’s unknown if the slight upward trend for the total award rate will continue, particularly if the program faces federal budget cuts, but for now, we can assume close to a 23% award rate for the 2018-19 awards.

How many applications for the Fulbright U.S. Student Grant for Study/Research are received each year? 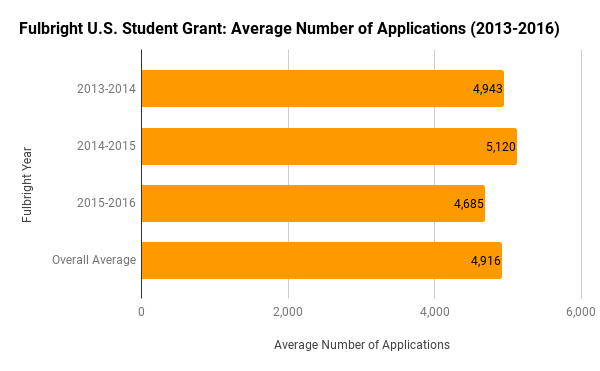 How many Fulbright U.S. Student Grants for Study/Research are awarded each year? 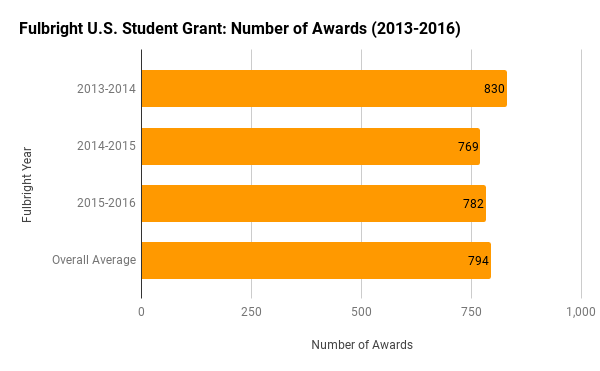 Which Fulbright U.S. Student Grant countries receive the most applications for Study/Research?

Country rates have not changed much over the past three years. The United Kingdom receives the most applications on average (842), almost three times that of Germany (298), the next runner up. Other popular countries include India, France, Mexico, Italy, China, Spain, South Africa and Australia, with average application numbers ranging from 105 to 200. 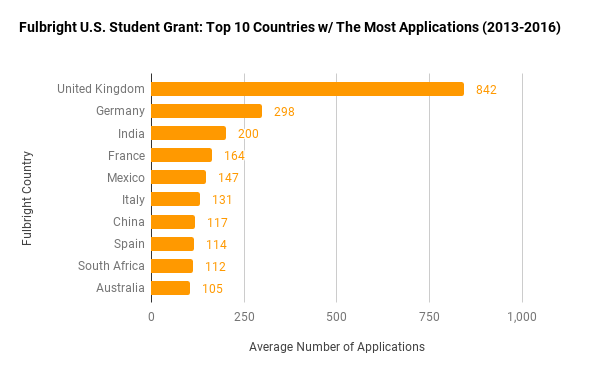 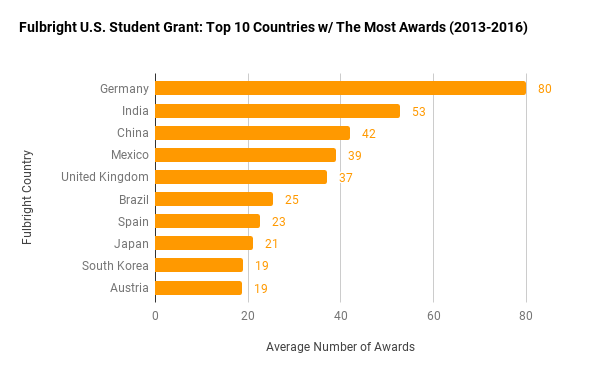 Candidates are always interested to know which countries are the least competitive. On average, there are more than 23 countries that receive less than 5 applications each year. Kiribati, Papua New Guinea, Solomon Islands, Tonga and Tuvalu, small South Pacific Island Nations, receive on average only 1 application a year! In these places, knowledge of a local language is encouraged but not required. Also, in these places, only research projects are accepted; graduate degree enrollment is not possible.

Niger, Lesotho and Ivory Coast receive on average only 2 applications a year. Niger, in West Africa, requires intermediate French language proficiency. A research project in Lesotho, in Southern Africa, can be conducted in English (fluency in Sesotho may be helpful but is not required). Ivory Coast (also known as Cote d’Ivoire) requires candidates to have a doctoral degree and intermediate French language fluency. Candidates may propose to conduct research in Teaching English as a Foreign Language, the medical sciences, biological sciences, and French studies, among other fields.

Other countries with less than 5 applications on average per year include Vanuatu, Togo, Congo, Kuwait, Slovak Republic, Swaziland, and Uzbekistan.

It’s important to keep in mind that these countries do not necessarily grant Fulbright awards every year. The Fulbright Commission stresses that awards will be made based on the quality of the application. 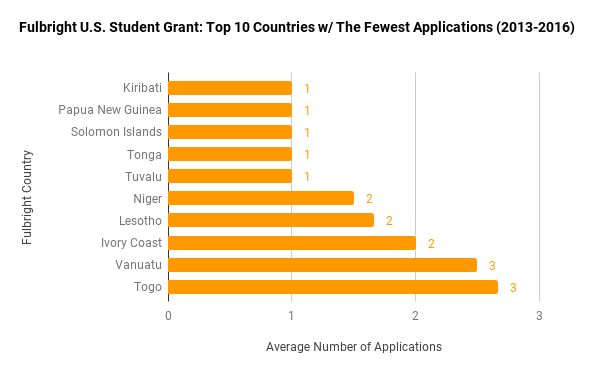 Which Fulbright U.S. Student Grant countries have the highest award rate for Study/Research? 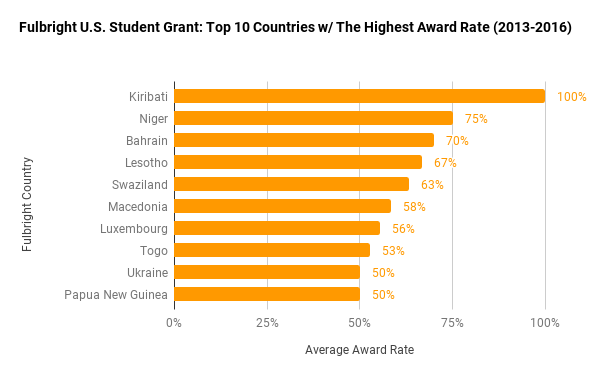 Which Fulbright U.S. Student Grant countries have the lowest award rate for Study/Research?

These low award rates should not dissuade you from applying to these countries if you have a well-structured project that can only be conducted in these locations. However, you may find equally interesting and challenging Fulbright experiences to be had in countries in the same region with similar language requirements. Be open-minded and look into all possibilities! 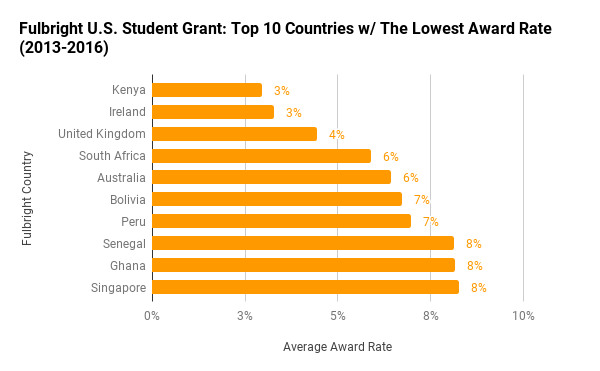 Application statistics are one tool to help you determine which country to apply to for a Fulbright U.S. Student Grant for study or research. However, they shouldn’t be your only consideration. No matter where you apply, Fulbright is highly selective and will not grant an award for an application that is not excellent, sound and compelling. Check out university Fulbright advisor and Fulbright alumna Zoë Gioja’s Tips for Fulbright Applicants: How to Choose the Right Grant. Also be sure to check out: