What is the Fulbright ETA award rate? 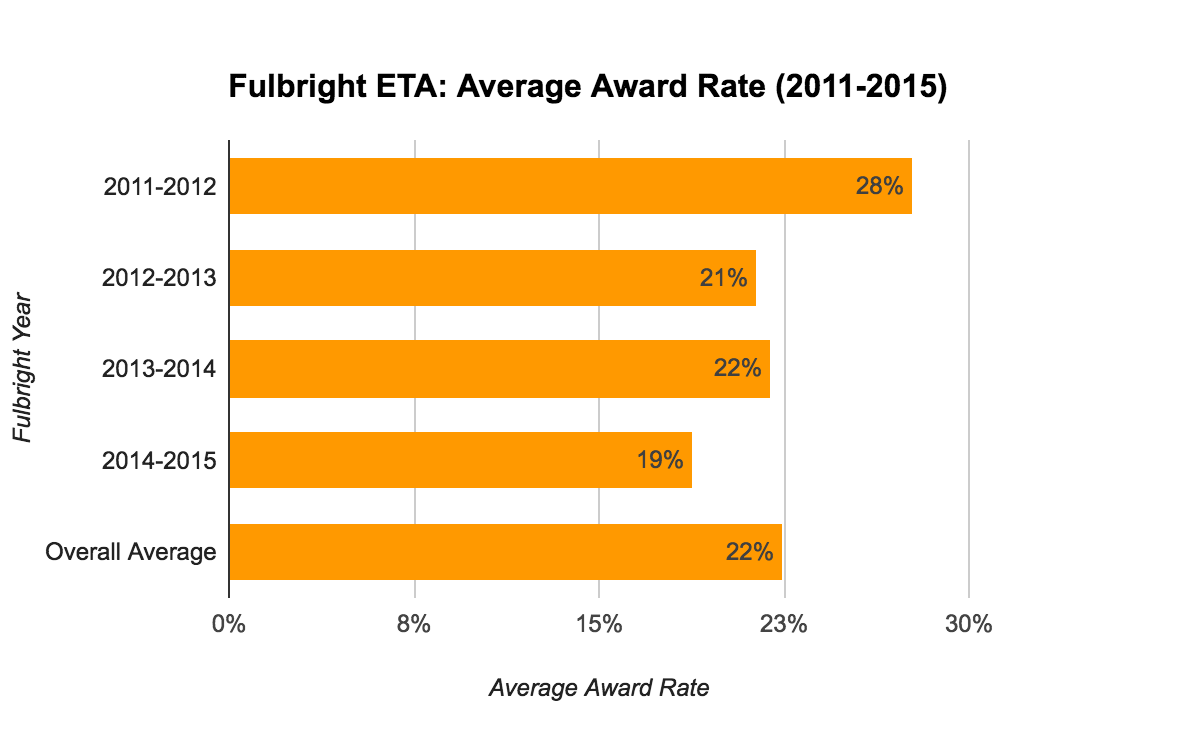 How many Fulbright ETA applications are submitted each year?

On average, more than 4,400 applications are submitted every year. During the 2014-2015 application year 4,955 people applied to the Fulbright ETA program, meaning the applicant pool has grown by 27% since 2011. Great to see more young leaders are interested in teaching English abroad! 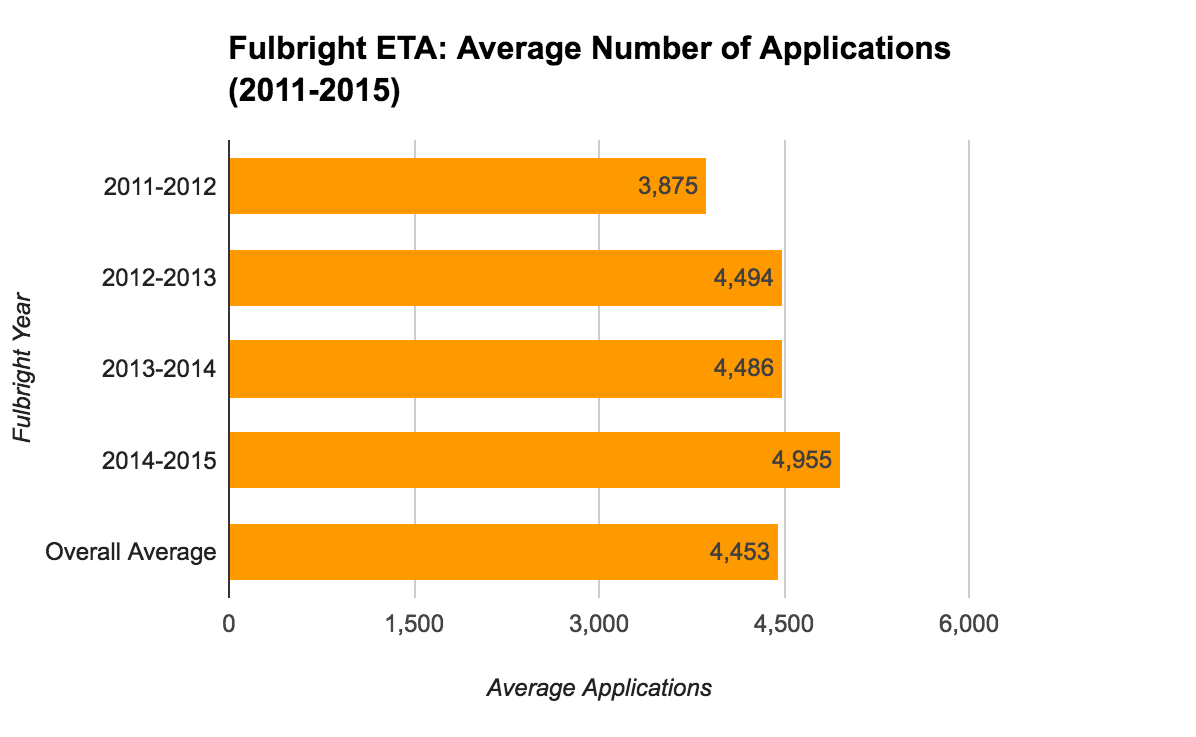 How many Fulbright ETAs are awarded each year?

On average, more than 900 awards are made every year. Although the award rate has decreased over the years, the good news is, the total number of awards has increased by 22% since 2011, with a record 981 ETAs awarded in 2014-2015. 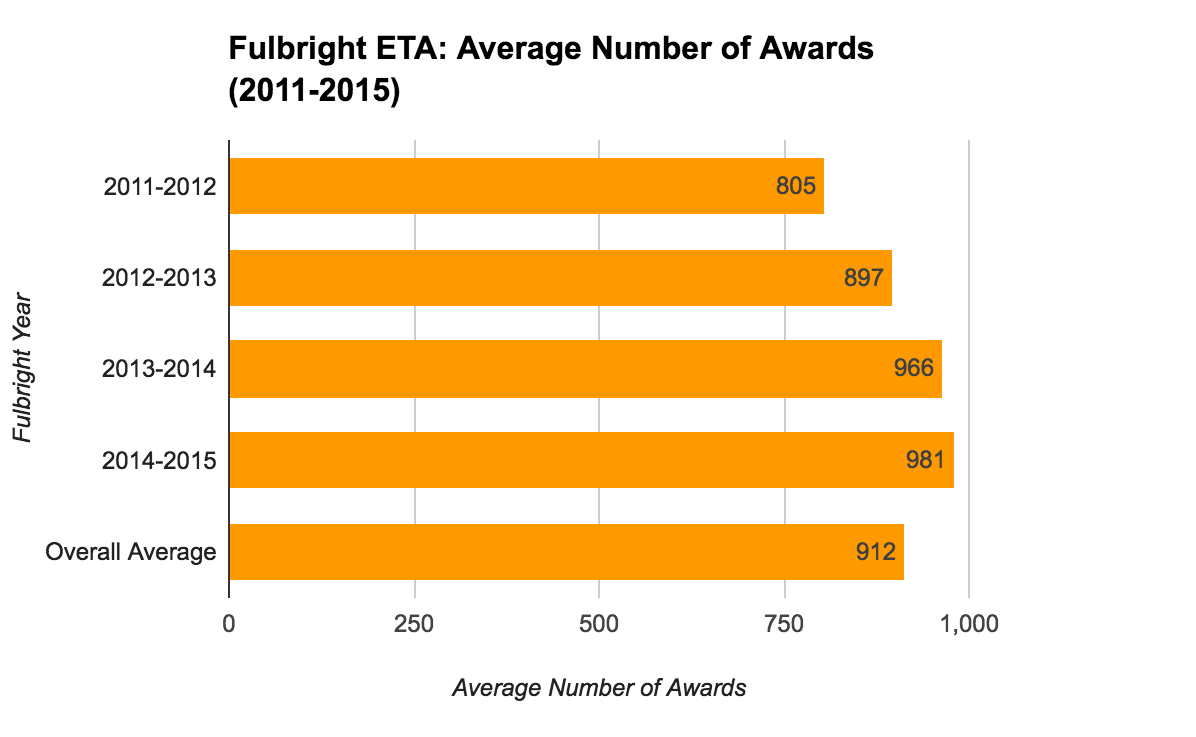 Which Fulbright ETA countries receive the most applications?

Spain receives the most applications on average, followed by Germany. Germany also receives the second highest number of Fulbright U.S. Student Program applications for study/research, according to our analysis of the Fulbright U.S. Student Grant statistics. These were followed by Malaysia, South Korea and Brazil. If you are interested in applying to these popular countries, we suggest getting insights and tips from former fellows. Check out our interviews with Fulbright ETAs from these countries, including Mark Pan, a Fulbright ETA to Malaysia and Eileen Zhu, a Fulbright ETA to Brazil. 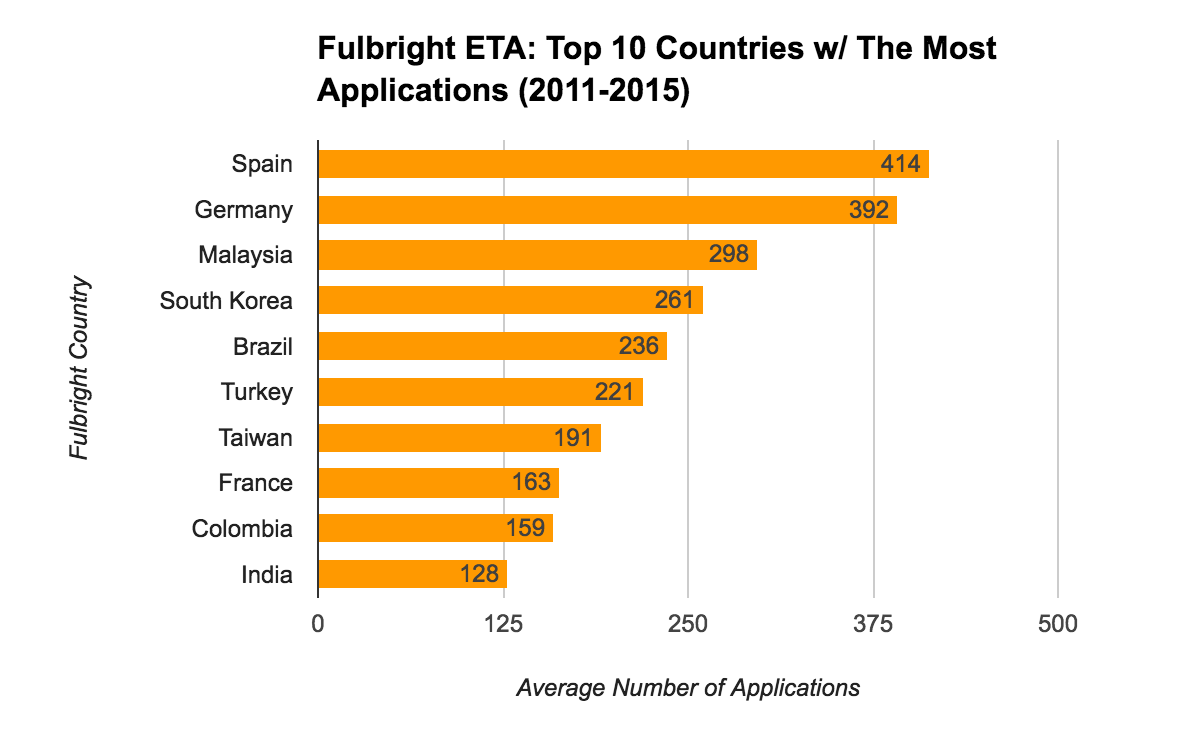 Which Fulbright ETA countries award the most ETAs?

Germany is the runaway winner in this category. On average, Germany awards 139 Fulbright ETAs each year, almost twice as many Malaysia, the runner up. ETA applicants likely have been doing their research on which countries give the most awards, because the next countries are South Korea, Turkey and Brazil, which also have some of the highest numbers of applicants. Curious what teaching in Turkey is like? Read insights from Carleigh Morgan, a 2013-14 Fulbright ETA to Turkey. 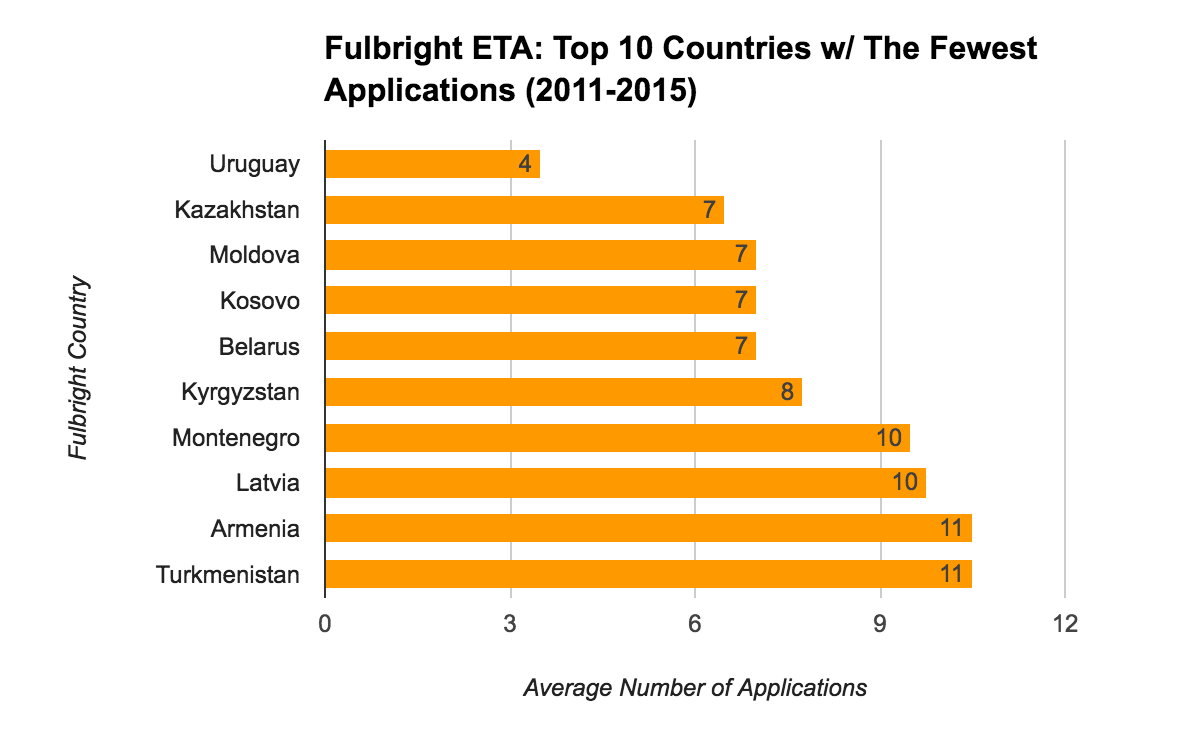 Which Fulbright ETA countries have the highest award rate?

The question you’ve all been waiting for. Latvia tops the list with an average award rate of 56%. However, most of these stats are skewed by low applicant and high award rates in previous years, so some of these countries are now highly competitive. Latvia for example had a 100% award rate in 2011-12 and 2012-13, which dropped to 14% in 2014-15. Kyrgystan is in the same boat, with a 100% award rate in 2011-12 that dropped to 25% in 2014-15. Some exceptions to this rule are Kazakhstan and Bangladesh, whose award rates have remained relatively the same, hovering between 33% to 50% during the last four years.

Germany is also an exception and makes the list despite the fact that it receives the second highest number of applications on average. Germany’s award rate has remained stable at 33% to 38% over the last four years. If you were considering applying to a Fulbright U.S. Student Grant to Germany, you might want to consider the ETA since it’s less competitive, according to our analysis. 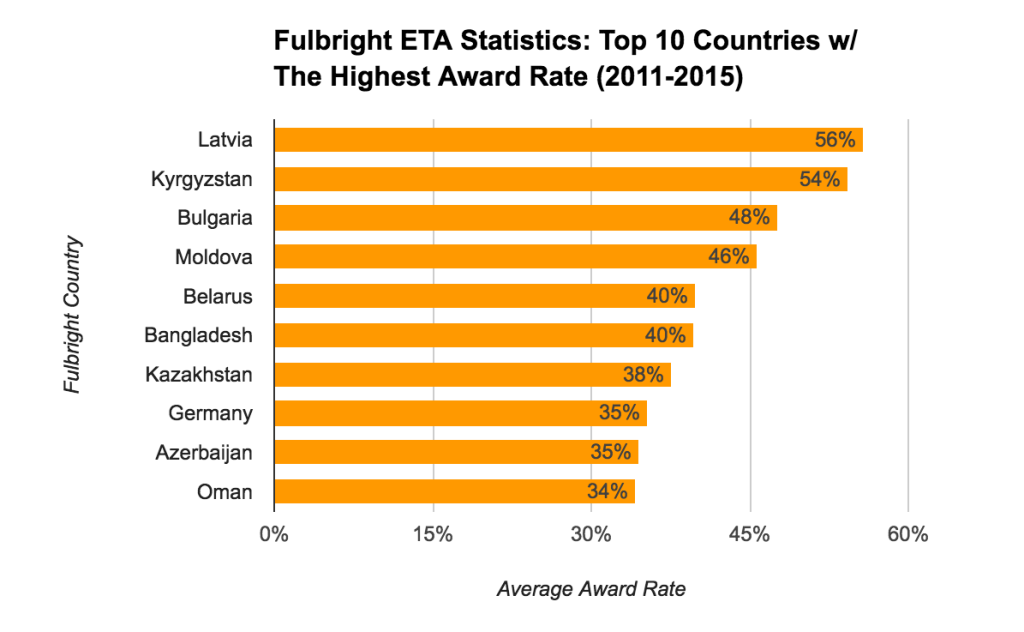 Which Fulbright ETA countries have the lowest award rate?

Venezuela is the most competitive country, receiving between 19-47 applicants over the past four years but typically awarding only 1 or 2 ETAs, if any at all. In 2014-15, Venezuela did not make any awards. France is similarly competitive and typically awards 6 ETAs each year after receiving more than 160 applications on average. Kenya, Norway and Italy have also had a consistent award rate of 7% or less over the last four years. Looking at this list, it’s no surprise that the most competitive Fulbright ETA countries are also popular American tourist destinations. If you have your heart set on one of these countries, don’t be discouraged. Check out our Fulbright application tips written by former Fulbright fellows. 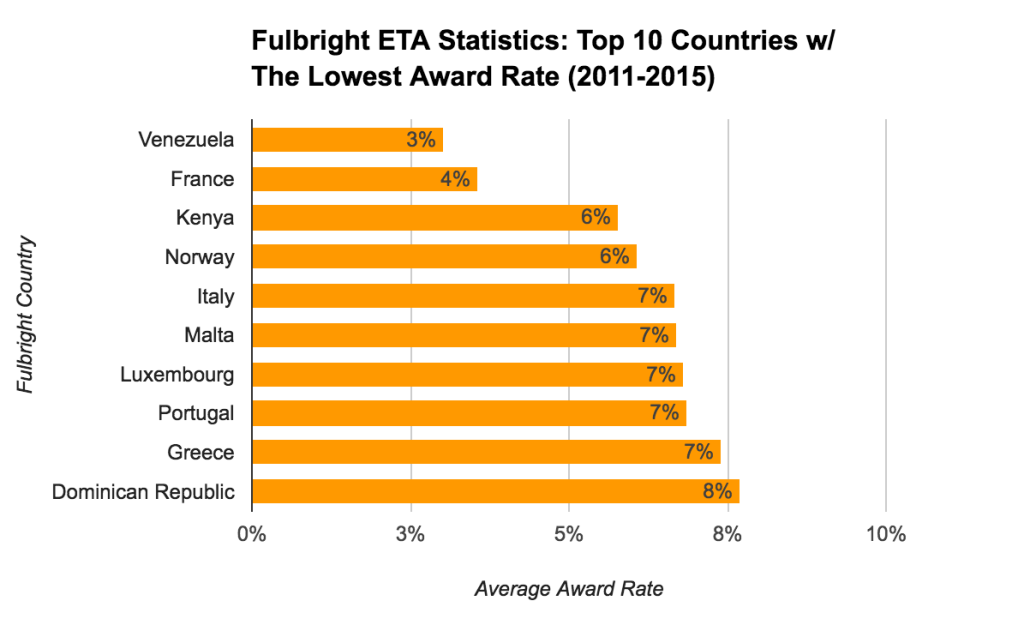 If you are considering applying to the Fulbright ETA program for an opportunity to teach English abroad, you may want to consider applying to countries in the Balkans, Caucasus and Central Asia, which have some of the lowest applicant rates and highest award rates.

No matter where you apply, the Fulbright ETA is highly competitive, so prepare your Fulbright application carefully and contact your university’s Fulbright advisor as early as possible for advice, checking in particular for internal deadlines and application requirements.