The Critical Language Scholarship (CLS) Program is an intensive two-month scholarship for US students to study a specific language in a country where it is most spoken. The goal of the CLS Program is to increase the number of Americans studying critical languages while creating lasting relationships with people living in other countries. The U.S. Department of State-sponsored program offers full funding opportunities for U.S. undergraduate, master’s and PhD students to fully immerse themselves in critical languages such as Arabic, Chinese, Hindi, Swahili, Korean, and more.

To learn more about the prestigious scholarship program, we spoke with two-time CLS Program participant Benjamin Lutz, who studied Arabic in Tangier, Morocco in 2016 and is currently working towards Arabic proficiency in Amman, Jordan.

1. What inspired you to apply for the Critical Language Scholarship Program?

As an International & Global Studies and Political Science double major focusing on the Middle East, Peace & Conflict Studies, and Interreligious Studies, I found it was imperative that I learned Arabic during my undergraduate years at my university as well as abroad. The CLS Arabic Program provided me the opportunity to study Arabic where it is most spoken overseas. I applied for the CLS Arabic Program all four years during college. My freshman and sophomore years I didn’t move past round one; however, during my junior year I received the CLS Arabic 2016 Program and spent two months during the summer of 2016 in Tangier, Morocco.

Last year, my fellowship advisor recommended that I reapply to the CLS Arabic 2017 Program and I am currently in Amman, Jordan, for my second CLS experience. My main goal for this program was language acquisition and I can definitively say that my time in Tangier significantly expanded my comfort and familiarity with Arabic. I am confident that my time in Amman will further my goal to Arabic proficiency. The most important part of this program is the language pledge, which is a formal commitment to speak the target language almost exclusively throughout the summer. This program is difficult but propels students to high levels of language acquisition through the classroom, host families, excursions, cultural activities, language partners, and living locally where the language is spoken.

2. What were some of the most eye-opening moments during your time spent immersing yourself in another culture and language?

Before both of my CLS Arabic Program experiences, I previously studied abroad in both Morocco and Jordan, which allowed me to make deeper connections when I returned to both countries during the CLS. The differences between these two countries in terms of Arabic learning are very striking. Arabic learners who study abroad all learn the difference between the classroom-taught Modern Standard Arabic, and the dialects of each area they travel to. Moroccan dialect, called Darija, is a mix of Arabic, Amazigh (Berber Language), French, and Spanish. This combination of languages creates a challenge to communicating since when most students study only one of the four languages that make up Darija. Being on an Arabic program, the staff and students were familiar with Modern Standard Arabic but most of the students were unaware of the extreme differences between Arabic and Darija. 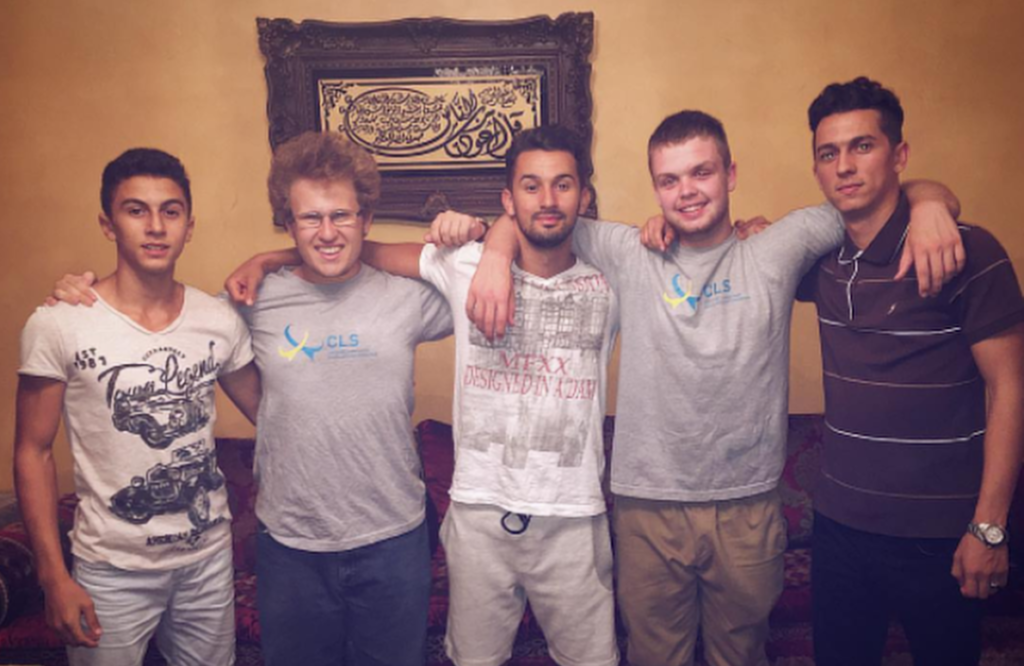 In Jordan, its dialect of Ammiyya is very similar to Modern Standard Arabic. Although some letters sound different and there are different words, most students who solely study Modern Standard (such as myself) were able to pick up the dialect and communicate more authentically with the locals in their form of Arabic. The biggest difference between the two programs was my lack of familiarity with Darija as it was learning a second language entirely in order to communicate with local Moroccans, whereas in Jordan I almost immediately spoke in Ammiyya with Jordanians I met throughout my program.

Further, during both CLS Arabic Programs, I was in the Middle East during the holy month of Ramadan. Ramadan is a time where Muslims around the world fast during the hours of sunlight (around 3am-7pm) but have a big communal meal called “Iftar” every evening. It is a time of introspection and being in Muslim-majority countries during this month has brought a phenomenal addition to my cultural competency of the region. I fasted alongside my host families and local friends as a way to truly experience what my teachers, friends, and families were doing throughout the month. The last day of Ramadan is a huge festival called “Eid Al-Fitr” to celebrate completing Ramadan. Eid Al-Fitr is beyond exciting and I loved being in the Middle East to experience it first-hand.

3. What tips would you give others applying to the Critical Language Scholarship Program?

The CLS Program for all of its 14 languages is the best program for language learning. You are in the culture and country where the language is actually used while studying with other Americans who have similar passions for the region. These students all care deeply about some aspect of the region as well as language. It was phenomenal meeting all the students and learning about their reasons for studying Arabic, as we all had different majors and specializations. I think that I did not receive the CLS Arabic Program my freshman and sophomore year because I did not have an experience that directly demonstrated my appreciation for Arabic outside of the classroom.

During my junior year, I studied abroad for a semester in Jordan. I discussed this in my application to highlight my commitment to the language and appreciation for the culture. I think this study abroad experience was the catalyst for my CLS Arabic 2016 Program as well as my thesis on the Jordanian Refugee Crisis. Through the fellows program at Elon University, I researched how Jordan shifted its domestic policies in regards to the Syrian refugee influx into Jordan. Living in Jordan for four months during the biggest shift in Jordan’s policies (the creation of the work permit program in March of 2016) allowed me the unparalleled opportunity to speak with locals about their thoughts on the policies in Arabic. Studying abroad is not a prerequisite for the CLS Program, but a commitment to the language is. I was able to best showcase my commitment by going on my semester abroad while also conducting research.

The CLS Program is looking for students who care about the language. No matter which of the 14 languages you choose to study, you must make it clear in your application why you are studying the language and your appreciation for its subsequent culture. The CLS Program is not easy; you are living in a brand-new culture for two months and speaking a language that you are studying (sometimes with only one semester before you travel). Before you apply, know that you will be fully immersed throughout the summer, exploring incredible sites, making incredible memories, but also speaking almost exclusively in a new language. My CLS Arabic 2016 program immensely improved my language acquisition through all of its activities and the CLS Arabic 2017 program is currently furthering my fluency. Your fluency level before CLS is not important, but your appreciation for the language is the most significant aspect of your application.

Benjamin Lutz is a recent graduate from Elon University with a Bachelor’s of Arts in International & Global Studies and Political Science where he concentrated on the Middle East, Peace Studies, and Interreligious Studies. He is currently enrolled at the University of Bradford for a Master’s of Arts in Middle East Security, after which he plans to permanently move to the Middle East to conduct internal and regional peace diplomacy.