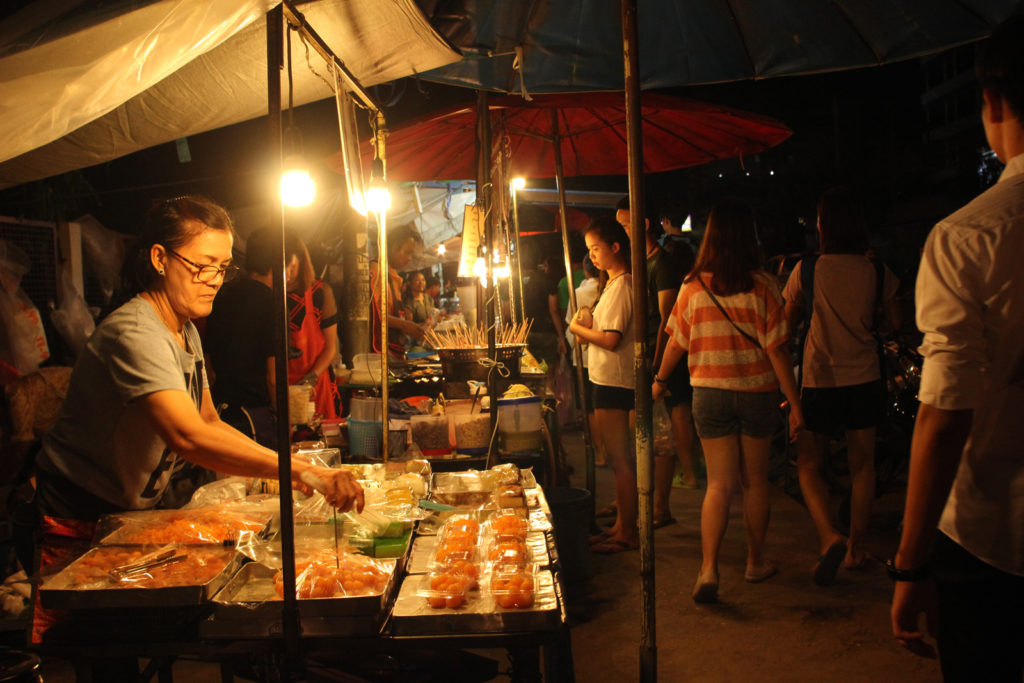 Our guest columnist Annie Peyton is writing from Thailand on a 2016-17 Henry Luce Scholarship. The Luce Scholars Program is a nationally competitive fellowship program that provides an individualized professional placement in Asia for 15-18 Luce Scholars each year.

I’m halfway through one of the more unexpected periods of my adult life: intensive study of Thai language.

A month into my Luce year in Thailand, my days now revolve around classes at Chiang Mai University. The Luce Scholarship starts with two months of in-country language training, followed by a work placement for the remainder of the fellowship. There are three Luce Scholars in Thailand this year, two of whom will stay in Chiang Mai for their placements—I’ll move to Bangkok after the language portion—and together we take classes from two patient and aurally flexible Thai teachers. Our instruction book is ambitiously titled “Speak Thai in 15 Days”.

Thai is a tonal language, and difficult to pronounce correctly—and, additionally (for me), to remember which word has which tone. High tone, rising tone, mid-tone, falling tone, low tone: a month ago, I barely knew these existed. Now, they are the difference between “near” and “far”; between “horse”, “dog”, and “come”; between “to have experienced” and an inappropriate word that our teachers have told us will result in peals of laughter from Thai friends. Fortunately, Thai grammar is simple. One of the teachers has said, “Thai people only think about two things: food and fun. That’s why the grammar is so easy. No room for anything else.” (She also said that she wanted to become a Thai language instructor to take revenge on foreigners: “You have words in English like, ‘tough’, ‘though’, ‘through’, ‘cough’. Now it is my turn to teach you difficult things.”) Our Thai seems to be the most proficient with food-related words: I figured out early on how to say “mango-watermelon smoothie, please” but still sometimes forget more important things, like numbers or directions. (Food and fun, right?) 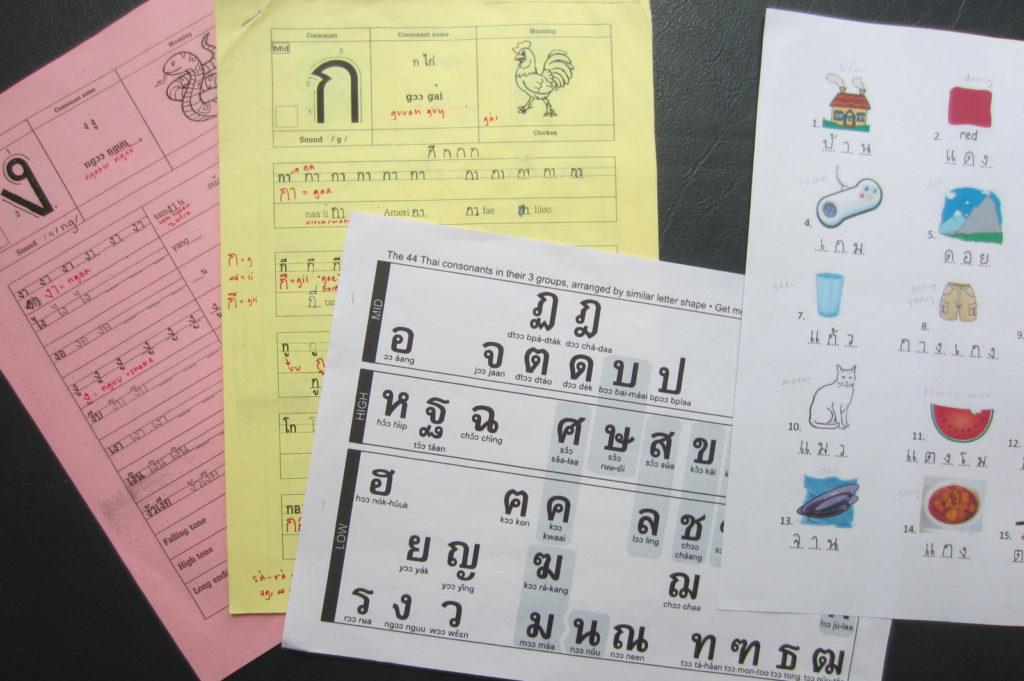 I’ve found some solace in the written language: learning the Thai alphabet has been fascinating. Vowels bounce around, modifying consonants from the left, right, top, or bottom of the letter. Figuring out each word one letter at a time is like a puzzle, which might be a self-placating way to intellectualize something that someone might do in primary school. Once we sound out a word (“g-aeh-ng”), we have to mentally cross-reference if we’ve learned that word in our phonetic vocabulary lessons. (In this case, yes: gaeng=curry!) It’s mentally tiring to concentrate so hard on translating a simple sentence. We trace over Thai letters on worksheets, like a child learning to write for the first time, slowly adding sounds to our mental roladex. Once we had covered “n”, vowel “ii” and vowel “ae”, our teacher wrote a word on the board, and I slowly sounded it out: “Aehn-nii”. Annie! My name! I felt childishly excited, and got an immense amount of satisfaction from the recognition of myself in the language of my new country.

Most of my Thai interactions have been limited to, “How many baht does this cost?” (and hoping to understand the response—a motivating factor in quickly learning numbers) and “I’d like khao soi and plain water, please.” Many restaurants have English translations or pictures on menus, and food stalls, of course, have actual food at which to point. Additionally, most people are able to communicate in English for these types of interactions, so my limited Thai hasn’t yet been a big issue. I hope that after the full language block I’ll have enough of a base to move forward in a more meaningful way—that is, being able to say anything beyond childlike sentences in social or work settings. 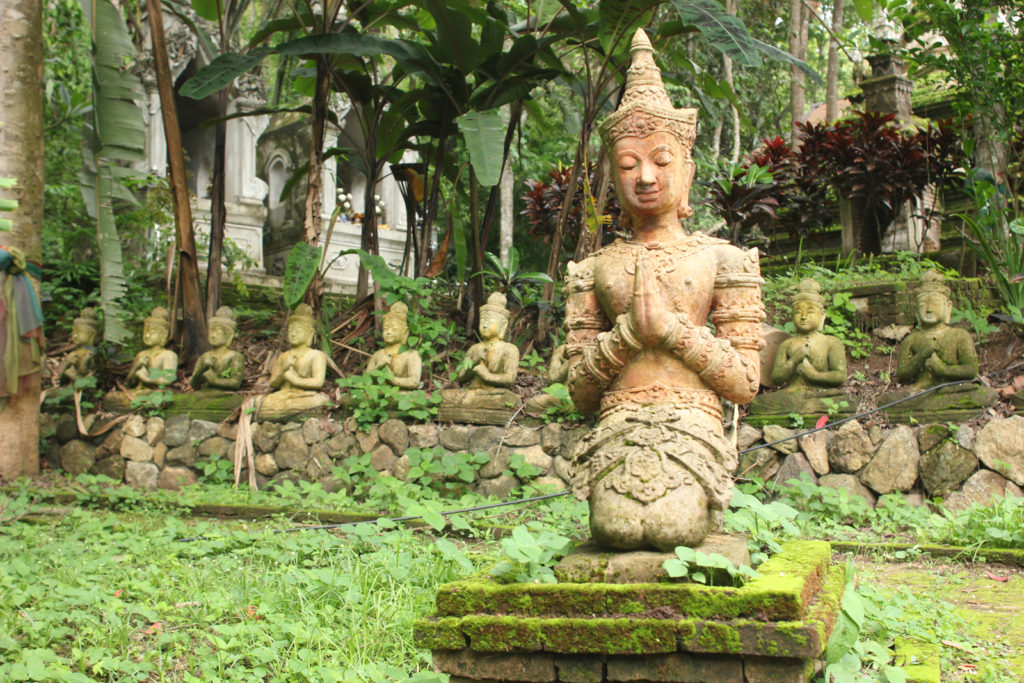 I quickly visited my future office during a brief stay in Bangkok before flying to Chiang Mai, and am not sure yet what my time there will be like, both linguistically and professionally. The office is fully Thai, and being surrounded by people my age for 40-plus hours per week will probably be the best way to advance my language skills once I’ve learned the basics. They’ve expressed interest in improving their English while I’m there, and I’ll be happy to have the language learning go both ways. Unique in my case, though, is that design and architecture work is largely visual: we should be able to sketch our way out of confusing situations.

Outside of language class, I’ve been exploring Chiang Mai, both solo and with the two other Luce Scholars. I live close to the university and there’s lots of cheap street food, cafes, and restaurants nearby. My favorite thing is to walk down the university-bordering street in the early evening and see all of the vendors doling out noodle dishes, meat kebabs, and strange gelatinous desserts to people milling about. The street life is fun to watch and partake in. I’ve sat at the plastic tables next to some of the food carts for a solo noodle-dinner and ended up talking with the young university students seated near me—a small attempt to practice Thai (and eat all the Thai food I can). 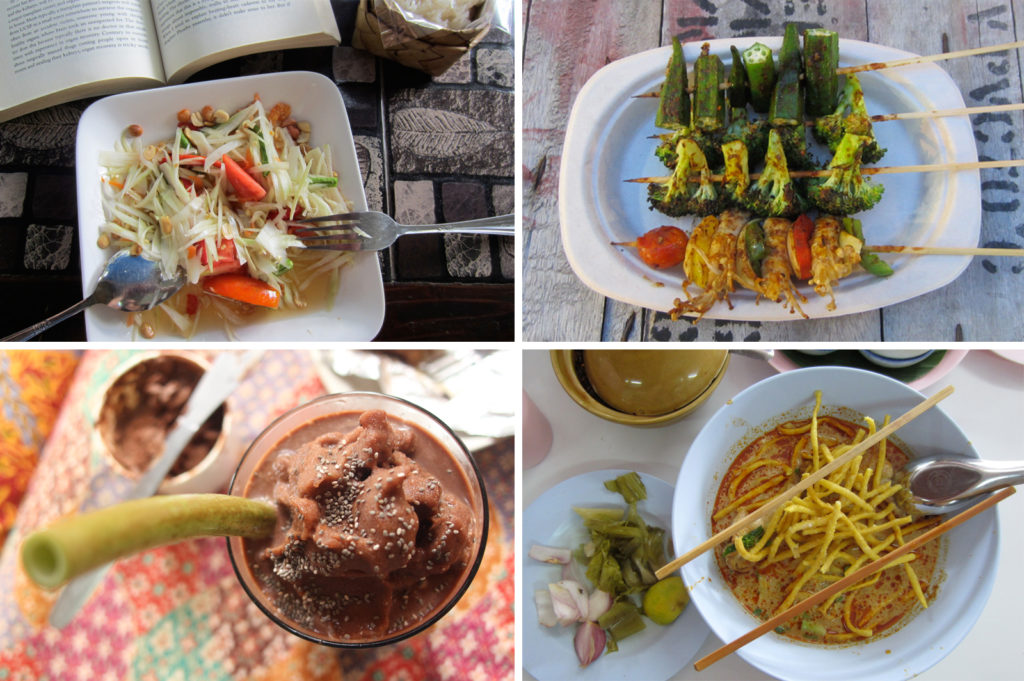 I took a weekend trip to Pai, a few hours north of Chiang Mai, with the two other Luce Scholars, to lazily walk around, swim near waterfalls, and get surprisingly painful Thai massages. I learned to ride a moto (which seems to be the transit mode of choice for many people in Chiang Mai; the other two scholars have both bought motos), so I’ve rented one for the rest of my time here. I’m very pro-walking, -biking and -public transit and have never owned a car, so renting a moto for a month is the closest I’ve come to private vehicle ownership. I feel somewhat morally mixed about this—but it is fun to use, and feels very Chiang Mai-appropriate. 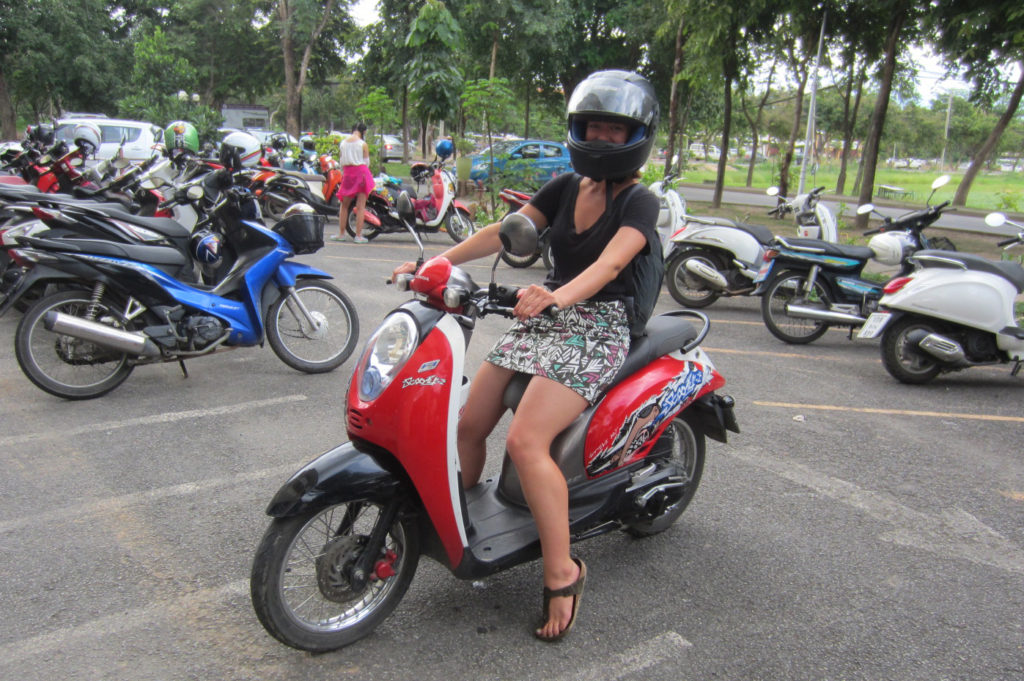 I’m appreciative for mental hiatus that language class, in some ways, brings: time to settle into life in Thailand, focus on a new language in a way that would be impossible if done alongside a full-time job, and, for me, explore a city and a region that won’t be my home base for the majority of my Luce year. For the rest of my time here, I’ll try to explore new cafes to work on Thai flashcards, eat northern Thai food (and learn what distinguishes that), and, in an attempt to counter my tone-deafness, listen, again and again, to recorded words: “maa—máa—màa.”